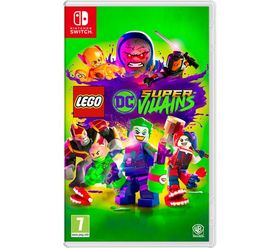 Play as the villains Who wants to be a hero, anyway? Lego DC Super Villains puts you in the role of one of DC Comics' classic villains, such as Lex Luthor, Deathstroke, or The Joker. The Justice League have been replaced by their counterparts from another universe, calling themselves the Justice Syndicate. It's up to you as the original villains to uncover the intentions of this new group of wannabe heroes, then dismantle them so you can get back to robbing banks. Unique gameplay Embrace your inner villain and make use of menacing pranks and tactics to overcome the Justice Syndicate. As well as the classic gameplay you expect from a LEGO videogame, you can use villainous new tools like Scarecrow's Fear Toxin to send opponents running in horror! Local multiplayer Your friends and family can pick up a second controller and join you on your villainous rampage. Put together classic supervillain team The Joker & Harley Quinn, or play as a duo that haven't worked together in the comics before like Killer Frost & Sinestro.