Home/Electrical/NINTENDO SWITCH Cadence of Hyrule: Crypt of the NecroDancer Featuring The Legend of Zelda 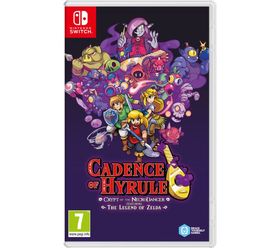 Save the Hyrule Kingdom with a rhythm in the Nintendo Switch Cadence of Hyrule: Crypt of the NecroDancer Featuring The Legend of Zelda. As a cross-over between the two series, you get Crypt of the NecroDancer gameplay, but with all the characters, locations and style of Legend of Zelda. But what's most important is the music. Keep the rhythm to beat your foes with your favourite tunes of the Zelda series! Choose between playing as Link or Zelda and embark on an adventure to wake the king of Hyrule from a magical slumber. An evil cacophony of enchanted music spreads over the lands and your favourite hero and princess are the only ones to save the day. The game includes a season pass for three packs of downloadable content and bonus costumes for Zelda and Link.